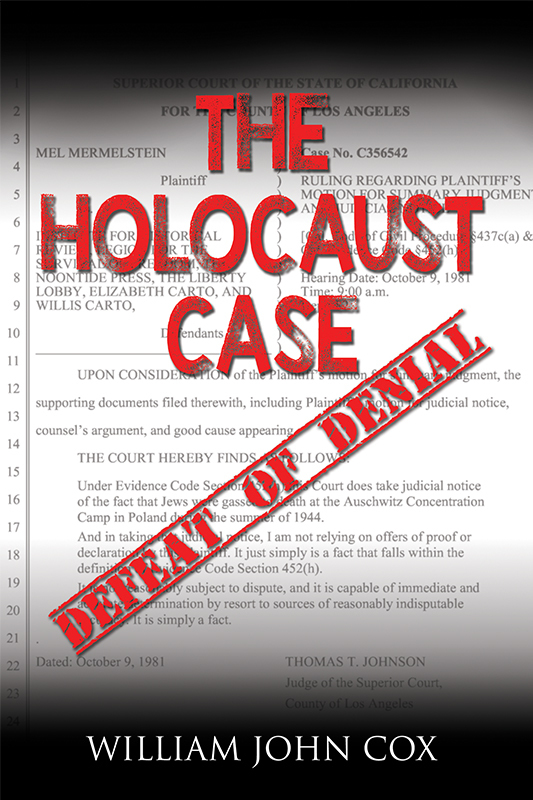 The Holocaust Case, which ruled the gassing of Jews by Hitler was “simply a fact” and “not reasonably subject to dispute,” was featured in the movie, Never Forget, but the real story has never been told.

Now, for the first time, the true facts are revealed by William John Cox, the public-interest lawyer who represented a Nazi death camp survivor and sued the radical organizations that denied the Holocaust. In retaliation, Cox was sued for defamation by the reclusive leader of a shadowy consortium that earned millions peddling historical lies and bizarre theories of racial superiority. His recollection of these matters is supplemented by official court records.

In a poignant personal memoir, the author details his path from an orphan named “Billy Jack” to a police officer to a representative of a secret client in the publication of the suppressed Dead Sea Scrolls.

Along his circuitous life path, Cox meets another orphan−one who could never forget the extermination of his entire family by the Nazis. The survivor had been taunted by the deniers to prove the truth of the Holocaust. Together, the two accept the challenge and make history.

Cox discusses his unconventional practice of law, in which he undertook these landmark cases without charging a fee, and tells why he did it. He derives lessons from the Holocaust and explains how the insights relate to current social and political conditions.

Reviews of The Holocaust Case: Defeat of Denial

While many of us have met Mel Mermelstein and knew of his stubborn stand against the Institute for Historical Review's bigotry paraded as scholarship, few of us knew of William Cox's vital, self-sacrificial role in the long struggle to silence the IHR. Nor did most of us understand how critical was the judge's judicial notice that the Holocaust was simply a fact—an opinion he skillfully elicited in his brief. There are many unsung heroes in the fight against the bigotry implicit in Holocaust denial.

Solomon Littman, Visiting Scholar, Judaic Studies, University of Arizona, and author of Holocaust Denial: Bigotry in the Guise of Scholarship

The Holocaust Case tells about one groundbreaking court case that shows where freedom of speech gives way to deliberately hurtful hate-speech. It shows that adversarial processes have a place in airing history and establishing the truth.

David Brin, Futurist and author of The Transparent Society