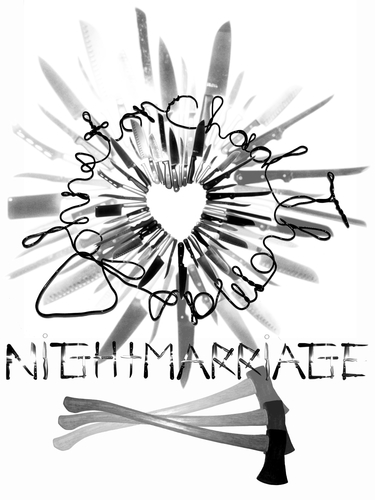 Chad Thomas Johnston’s Nightmarriage is a whimsical memoir that explores the terrors of marriage and the perils of parenthood. Adapted from Johnston’s blog series of the same name,Nightmarriage proves that, when two people marry, their flaws tie the knot, too. In essays such as “My Wife, the Black Hole,” “Hearts and Jumper Cables,” “Knives and Wives,” “Honeymoonwalking (to Jail),” and “Blessed Are the Tentmakers,” Johnston weaves stories on his literary loom that are equal parts luminous and lunatic.

Writing as only a minister’s son with Obsessive-Compulsive Disorder can, Johnston has crafted an observational ode to both the blunders and wonders of wedlock, and his writing is punctuated accordingly with absurd alliteration, appalling puns, and madcap metaphors.

Nightmarriage is a must-read for fans of David Sedaris, Robert Fulghum, and Anne Lamott.

While Johnston created the cover art himself, the interior of the book features original work by artists BARRR, Dan Billen, Ben Chlapek, Megan Frauenhoffer, Danny Joe Gibson, Mark Montgomery, and Darin M. White. The appendices of the book also include Twitter stream excerpts, recipes, artist information, and other miscellany from the world of Chad Thomas Johnston.

Nightmarriage was a finalist for a 2013 Shirley You Jest! Book Award in the non-fiction category.

***** (out of 5) “No one writing today can sling language around like Chad Thomas Johnston. Like the knives on the book's cover, his words slice through common places, coming out clean and sharp. And always pointed: the brilliant wordplay serves the purpose of dazzling insight.”—Peggy Rosenthal, author ofKnit One, Purl a Prayer: A Spirituality of Knitting and co-author of Reclaiming Beauty for the Good of the World: Muslim and Christian Creativity as Moral Power

“Johnston revels in wordplay throughout the book, using alliteration, assonance, and a pinch of puns to leaven the often serious issues of marriage and parenthood with his charming lunacy. He skewers his wife and he skewers himself again and again, and the repeated banana-peel-slips become a kind of healing mantra.”—Tyler McCabe, IMAGE Update, biweekly newsletter of IMAGE Journal

“The manner in which Johnston relates (his story) is winning: with a mischievous heart, as well as with a high regard for how the world-altering—such as the pending arrival of a child—sometimes can be discerned in the small, domestic detail.” —Brian Burnes, The Kansas City Star

"''Nightmarriage,' 'Abra-Chad-Abra,' 'Honeymoonwalking' . . . If I had a dime for every winning pun on the trials and triumphs of early marriage and parenthood that Chad Thomas Johnston has to offer in his debut, I still might only come out with a dollar (now that I consider the actual math). But what a dollar it would be—rarer than a silver one, and in its own right a golden one. With it, I can go a long way toward paying off the renovations of the heart, ‘a home under construction,’ as Johnston describes it with his other recurring literary device—or rather, the lack of one: honest-to-goodness thanks for the persistence of grace." —Bradford Winters, writer for HBO'sOz, Starz's Boss, and FX’s The Americans

“Chad Thomas Johnston writes with tenderness and insight to reveal the beauty in life’s every moment. He exposes, like unearthed treasure, the opportunities we all have for epiphany, for drawing closer to one another and to God, for living the lives to which we are called.”—Tony Woodlief, author of Somewhere More Holy (Zondervan), essayist whose works have appeared in The Wall Street Journal, The London Times, and WORLD Magazine

***** (out of 5) “This story of courtship, the first years of marriage and early fatherhood is honest, funny, insightful, inspiring, sweet, clever and well told. I enjoyed it enormously.” —Jan Vallone, author of Pieces of Someday (Gemelli Press), winner of the 2011 Reader Views Readers’ Choice Award

***** (out of 5) “A fascinating, hilarious, and witty book . . . an excellent debut.” —Joseph Kyle, music critic for The Big Takeover, former contributor for Pitchfork, No Depression

***** (out of 5) “Chad—I can call him that because he's my friend—is a talented and quirky writer. He plays with language with such skill that it's both clear and also complex. And this book about how his young family came to be is both funny and charming. A great read for anyone who has blundered and blessed through marriage, child-rearing, and locking yourself out of the house.” —Andi Cumbo, writing instructor, blogger, and author of God's Whisper Manifesto: The Makings of a Dream

***** (out of 5) “This book is a marriage of wit, faith, intelligence, and love—a rare combination that the world needs these days. Johnston is a funny Christian—yes, that's possible—who represents a new generation of writers changing the tone of American literature.”—Richard Cole, author of Contemporary Poetry Series collection The Glass Children (University of Georgia Press) and forthcoming memoir I Have Wonderful News (Loyola Press)

***** (out of 5) “I was so immediately engaged, that I read the book in one sitting. There is a wide-eyed innocence in the way he weaves together this memoir, not unlike the tall tale of a precocious child.” —Cindy Sheppard, Blogger at Cinzia, Lady in Weighting

I really can’t shamelessly advertise for (Chad) enough. He’s one of the funniest, most talented writers out there that you probably haven’t heard of, and that needs to change. Check out his stuff, because he’s awesome.” —Joshua Madden, BoomPopMedia.com